Many men have a fantasy of wearing mens g string underwear, which allow them to fly around freely without being restrained by any obstacles. The front of the male g-string underwear is made of sheer fabric, and the back is made of combination of string design. This male g string is made up of two color string design on the front and back, which not only give you a fashionable appearance but also help to hold your jewels in place. The underwear consists of two string that acts like a waistband. The sheer pouch is attached to one string and the one is attached to the piping design on the front. This mens g strings should only be worn on special occasions to get the maximum enjoyment out of it. If you plan on having a role-playing session with your spouse and you start to feel a little kinky, you should definitely try this gorgeous mens sheer underwear. 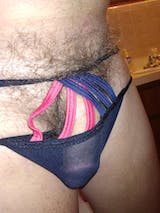 Needs an enhanced pouch to contain the goods.

Needs an enhanced pouch to contain the goods.

Product has been added to your wishlist.
You can view your wishlist by creating or login account.
Please create account through ##customer_email## email
Login Register
38