Daniel alexander bikini for men has small fabric in the front and at the back. The cuts offer an exotic touch to your personality, keeping your manhood in the most comforting way once you choose this pair of mens bikini underwear. The front molded pocket of mens bikini underwear upgrades the products for all to see while offering extraordinary throughout the day comfort. The seat of this mens lingerie is intended to permit enough cheek to come through, while not flaunting excessively. You get a small amount of fabric at the back in this male bikini and in the front, the required fabric is used for the pouch. The exemplary style of the string bikini for men is immortal. Permit yourself the chance to include the Daniel Alexander bikini to your mens underwear assortment now. It feels like a gift to experience such solace and backing once you pick this pair of mens underwear. You’ll feel the enhanced confidence while wearing this mens sexy underwear and along with it accompanies the comfort and long-lasting support. Along these lines, purchase this mens bikini underwear today

This feels so sexy. Going to wear this one out washing and wearing it so much. About to order it in every color 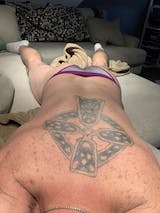 This feels so sexy. Going to wear this one out washing and wearing it so much. About to order it in every color

Product has been added to your wishlist.
You can view your wishlist by creating or login account.
Please create account through ##customer_email## email
Login Register
72